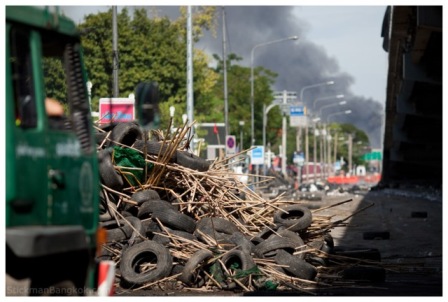 If you have had the chance to read what is being said in the international media about the Red Shirts you may be taken back a bit. What is being said is far from flattering, in fact it is much closer to being damning.

Be it as it is, people respond first to visual cues before analyzing the facts of a given situation. It is part of the survival instinct as certain visual signals say put some distance between the person and whatever be it a shark, a wild animal, or an angry mob with guns. Put the distance between first, then sort things out later is how it works.

So when you put everything else aside and look only at the visual cues of the Red Shirts, people most certainly do not get the warm and fuzzy feeling about them. In fact they have joined the ranks of undesirables that leave similar destruction and carnage in their wake. Photos of Red Shirts burning Bangkok and other government buildings outside of Bangkok send eerie reminders of terrorist attacks around the globe.

Because the media has been using  words and phrases like ‘dissident movement’ to describe the Red Shirts and indicating they are in opposition to reconciliation, people who do not have time to look at things in depth have simply written them off as a bunch of thugs and or terrorists. With the frequent mention of the name Thaksin Shinawatra in the same news story, he too is getting that same visual negative globally that many Thais have known for years.

This in turn will have some impact on apprehending the fugitive Thaksin. The fact that fewer people will need to be informed about the story behind Thaksin, their knowledge will pre-load an opinion about Thaksin based on that persons own moral and ethical values, even if their only knowledge was visual.

Eventually when elected politicians in countries that are playing host to Thaksin come up for reelection, their challengers could score a win simply by reminding the voters about how they are letting Thaksin stay and showing the destruction in Bangkok that is tied to Thaksin. The pictures will provide ample convincing, no narrative required. So even if Thaksin looks to buy that host country politician, it does him little good if he is voted out of office.

If you look at Prime Minister Abhisit in contrast, you see a dignified western educated politician who is doing his best to run a country and fight off Thaksin and the Red Shirts. Simply put, the worse the Red Shirts look and act, the better Abhisit appears in contrast. Even to people who do not back Abhisit, he would be the lesser of two evils and thus take his side.

Although the international media has been negative on the Red Shirts, it is still factual reporting. The fact that they are opposed to Prime Minister Abhisit’s road map to reconciliation that has international endorsements says a lot in itself. The Red Shirts are coming across as an angry snarling animal unwilling to be friendly. For many if that or any animal is incapable or unwilling to not be aggressive, many people would feel safer if that animal was put down with euthanasia or locked up forever. Seeing that there are terrorist charges pending, it seems movement that reflects that direction is underway.