As we continue to look at the players in this game of control, a few key characteristics are being uncovered. The two groups involved are divided at the shoulders. One uses what is above the shoulders and the other uses what is below.

The next group is the Red Shirts, and they are clearly making all the Alpha noises that include chest thumping to some extent. Threats of violence and then executed at any and all who would challenge them. There are more than a few stories of them attacking a single person as well as assaults on various compounds. This overt physical display of aggression serves to both intimidate and control. That in turn can cause people to do things against their will.

Many migrant workers missed the deadline to verify their nationality in February and authorities had no idea why until after the red shirt protests ended on May 19.

The nationality verification centre in Mae Sai district of Chiang Rai said no migrant workers showed up for the verification process between April and May while the anti-government red shirt gatherings were taking place in Bangkok.
They returned only after the red shirt rallies ended.

“We asked them why they had missed verification and where they had been. Many said they took part in the red shirt protest at Ratchaprasong,” said Pol Capt Jaruwan Wongsuwan, a Mae Sai immigration officer.

Chiang Rai has more than 20,000 migrant workers, of the 1.3 million alien workers nationwide. However, the actual number of migrant workers is believed to be much higher, which raises security concerns.

A source with the Mae Sai immigration office said migrant workers, particularly from Cambodia and Burma, were found mingling with the red shirt demonstrators.

So in this case the same intimidation methods used by dictators is clearly being employed. 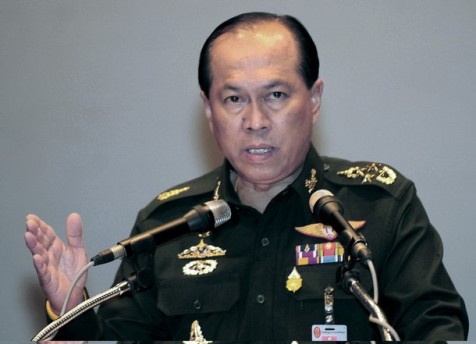 The next player is the Military and this is the only wild card player in the group. With the Top Brass due to take mandatory retirement shortly, the entire personality of the military changes with the passing of the flag. For now the military is loyal to the Monarchy and is also going the extra mile to use muscle as a very last resort.

Other people that weigh into all of this are Thaksin’s cronies on the run as well as the ones still in Thailand. There is mounting evidence that they funded what turned out to be a terrorist act. With the amount of money they allegedly funneled to overthrow the Thai government, they are playing a significant role in what could be defined as Lèse majesté actions. We will connect those dots later in this series.

The Pheu Thai Party (PTP) are also part of this Alpha game, but ironically they have yet to demonstrate any significant ability other than to be an annoyance. They simply make attacks and comments for the sake of making attacks and comments and few if any have any significant meat. In actuality this particular version of the PTP lacks all Alpha qualities and is more of an embarrassment than anything else.