As we continue to look at how being an Alpha plays into life in Thailand, it becomes a battle of loyalty. As time and age play an ever increasing role in the status of the Monarchy, most if not all Thais dread the thought of the news that the day of change has come.

With the inevitable looming ever nearer, everything and everyone in Thailand Thai or not is linked to the King in one way or another. We have already seen the Thai stock market take a nose dive when some erroneous information about the King’s health was spread. The fact that this happened shows without doubt the influence of the King runs to the roots of Thailand. In a way it speaks of lost children, and considering the political situation and how some Thai politicians are acting, that is an accurate assessment. 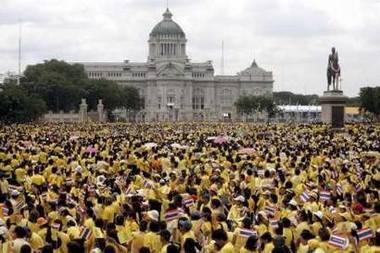 It is this influence the King has that is being protected as many fear Thailand may slip in to some state of anarchy without a common and accepted focal point. There is a significant possibility Thailand may slip into factions governed each by their own Alpha. Without significant education, many Thais will be easily lured into harming themselves by harming Thailand. This has been regularly demonstrated over the past several years. If votes can be bought, then so can people. This is yet another example on how the disgraceful Thai education system will come back and haunt the Thais in power.

In this case it requires an Alpha of Alphas to bring things together, and at this point no such player is to be found. But we are getting ahead of ourselves as many things can happen between now and that yet unknown day of change.

For now as Abhisit battles it out with Thaksin, there are some changes underway that will strengthen Abhisit. Those changes are the fear of not being able to avoid or delay jail time for crimes. It still has not sunk in that walking out of jail with a lifetime of appeals waiting may be over. With the Red Shirt leaders looking at the possibility they are going down for good, they may be the first example of a changed Thailand. That will tend to weaken Thaksin as an Alpha as his surrogate violence prone supporters will have second thoughts about the price to pay. On the flip side, only the worst of the worst will ignore that negative possibility. The ones on the fence will side with waiting for the next scheduled elections.

Part of the lure for Thaksin was the feeling of not having to worry about the law. Abhisit looks to change that and that will be a significant hit for Thaksin. As it looks now Thaksin is staying out of jail by using money and buying favors. That does not carry over to anyone else and that subtracts from his Alpha status. In nature Alphas are also providers and in some cases protectors. At the moment Thaksin can not protect anyone other than telling them to flee.

So what it looks like at the moment, Abhisit is working at destroying Thaksin’s Alpha status, and the tool of the moment is the State of Emergency. It allows Abhisit to control the situation by insuring only lawful activities are going on. It stops the gang / bully mentality dead in its tracks. But the State of Emergency can not last forever, but it can last as long as a genuine threat exists. For Abhisit to keep this dominant status over Thaksin, the fear of jail for crimes needs to be a reality and not a joke.