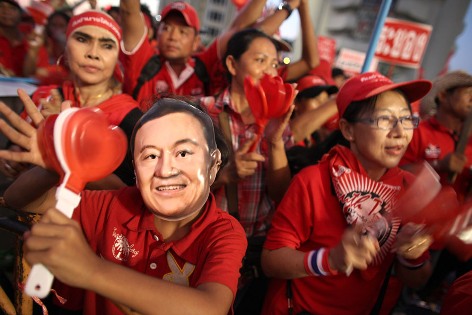 It took a little while to be sure, but it is clear now the convicted fugitive Thaksin Shinawatra is doing major damage control. There are enough things going on that suggest the majority of his energy is being spent on staying ahead of the law.

Thaksin has a few standard signatures that appear when he encounters a set back. Mostly they involve going off the radar and re-posturing for his next attack. There however is a significant difference this time. Because Thaksin is looking to take his issue to the world stage for whatever self serving reasons, it also means he needs to work on his appearance in the international arena.

Thaksin is no doubt finding out that the rest of the world is not as gullible and easily lead astray as his lesser educated Thai supporters. Hearing him try to explain things away to educated people from other countries using the same words and reasoning as he does with his Thai supporters is sadly amusing. For the most part he can not even produce the illusion of telling the truth never mind seeding doubt in the actions of the people he sees as his enemies.

Based on Thaksin’s comments on Twitter and the nature of the missions his hired help and cronies are doing, Thaksin is desperately trying to disconnect himself from the Red Shirt violence that was heard about around the world. Unfortunately that is looking to be an impossible task as there are just too many connections to explain away. In a way he is looking more and more like a Polar Bear where swimming and extinction look to replace ice fishing.

Thaksin’s attempts with the US Congress through his crony Noppadon Pattama were marketed as doing things for the Thai people. However the real reason was to work at discrediting the terrorist charges and thus the chances Interpol will act. Seeing is how that fell embarrassingly flat shows just what a daunting task Thaksin faces on the global stage. With a vote of 411 to 4 to accept Thai Prime Minister Abhisit’s Road map and reject Thaksin’s approach sums up fairly well how Thaksin is viewed in the west.

But Thaksin being Thaksin and never giving up, his next target is the European Union. But seeing that all the countries in the European Union felt it necessary to issue significant travel warnings about Travel to Thailand and understanding the Thaksin connection, it is fair to assume that their response will be similar to the US congress.

This collective rejection of Thaksin will make travel much more difficult if not impossible under his real name. The downside to this is Thaksin’s international Public Relations campaign is all but dead in the west, and that will drive Thaksin to use more covert tactics like assassination to achieve his goals. No doubt this is part of the reason for the extended State of Emergency.

If you can believe what is being said by Montenegro, it seems Thaksin has become a problem as Connecting the Dots predicted. Thaksin is not one to silently blend into the woodwork and disappear willingly. With Montenegro looking for membership with the European Union and North Atlantic Treaty Organization – NATO, Thaksin is that big negative that could shoot down Montenegro’s successful bid. If this is the case it either means Thaksin’s world just got smaller or he is about to get arrested.

Although anti Thaksin people may feel they have some reason to smile because of Thaksin’s mounting problems, it is still premature. For the most part everything that has happened suggests more violence, but not on a big scale. It will be targeted at members of the government as they now for the moment have the upper hand. Expect assassinations and bombs to be on the front burner. They will allow deniability for Thaksin, and for him that is a necessity to have any chance at getting back to power.