As the Thaksin on the run saga continues and he wears out his welcome country after country, his world is getting smaller and smaller. It would seem that countries that have a low number Thaksin is banned from entry. The ones he manages to sneak into quickly toss him out or encourage him to leave by not allowing him to launch political attacks from their soil. Sooner or later he may end up in Haiti as they could use his money big time.

France and Sweden both told Thaksin to keep his mouth shut, but alas he could not. He looks not to be invited back but we are not sure as the news was vague on that. Apparently some decisions were being made about Thaksin in the halls of power in those countries.

All and all Thaksin’s hunt for democracy is not going so well, but he has found countries that have high levels of corruption. Based on the reaction of countries that have a high degree of democracy, they simply hold their nose when Thaksin is near if they spot him. So apparently Thaksin and democracy do not go well together if at all.

Thaksin’s recent tweet on Twitter that said he had visited 16 countries over the past month. But when you think about that statement you need to ask yourself why 16 countries as that certainly is a lot more than most people would visit. Even the US Secretary of State Hillary Clinton may not even hit that number unless it is a cluster of countries that are tied together for some political mission. So that leaves us to conclude that either it is a lie on Thaksin’s part in that some countries may just be refueling stops, or rejection of entry, or just staying ahead of getting arrested. In any case the number is extreme and over the top and would be quickly cited as some sort of warning flag.

This all translates to no matter how much positive spin Thaksin tries to put on his social status, it does not take much digging to see that it is all spin and nobody wants Thaksin except for Thailand and his jailers. However as for Thaksin’s money, it seems to be welcome anyplace. Ironically some foreigners in Thailand can relate to ‘Give us your money then go away.’ 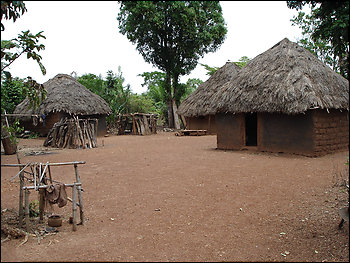 Connecting the Dots predicted some time back that Thaksin may end up living in a mud and grass hut at some point, and the way things are going, that call is still on the table as a possible outcome.

One Response to Thaksin’s score Part 3