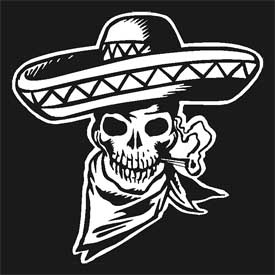 There is simply no other way to described this, but nearly 23000 deaths in 3 years is madness. Because of that, the Mexican drug war simply can no longer be ignored and labeled a local conflict as the number of deaths simply puts it on the global map.

Connecting the Dots has hinted that the drug wars in Mexico is a topic we would like to explore. After all it has all anyone could ever ask for. Kidnaped journalists, gruesome meaningless murders meant to intimidate, and now the latest car bombs. It has all the makings of a blockbuster movie based on violence. What more could we ask for! Unfortunately it will take us a bit of time to ramp up on our predictions if at all. The reason being much of what goes on is random and is based on simply being pissed off at someone, then going out and passing dozens of bullets through their body.

That seems to be one trait about this drug war that differs from the terrorists of the world. Terrorists do not care who they kill, they are only interested in a body count. But the Mexican drug war has the ‘We will kill your family’ twist to it. To characterizes that behavior, Saddam Hussein used the same tactic.

That leaves us simply to talk about where this is all likely to go and what needs to be done to stop it. Some common sense things in the USA are being stopped or delayed by red tape or whatever. That is simply stopping or slowing the flow of guns into the area. It is hard to shoot someone without a gun and throwing bullets at someone can make you look silly.

Although this is a shorter entry on our part, Connecting the Dots does want to provide some quality in what we write about and avoid a lot of useless filler. So with that said we will start digging deeper and connect the dots with the hopes of providing some clarity in future entries on this topic.