There have been enough dots created over the past year to provide some insight on the border conflict between Cambodia and Thailand around the Preah Vihear temple. Looking at what is being gestured and what is being said tends to reflect personality traits common in Thais and Cambodians. Those dots suggest one side already knows they are wrong.

The Preah Vihear temple issue is a bit like a pot of water poised over a wood fire that is settling causing more or less heat in given spots. Sometimes the pot boils, and sometimes the pot simmers. In recent weeks it appears more people have gotten involved in the mix namely the Cambodian Royals. As Connecting the Dots has suggested in the past, that may be the way to go seeing that both Cambodia and Thailand have a proper name that starts with “Kingdom of.”

But looking deeper and at the psychological makeup of each country as a whole, some of the personality traits are clearly involved. Not to say that they are right or wrong, but simply that they exist. That offers a series of dots that add some clarity to the picture.

Looking at the Thai side, we see past examples of Thai pride that suggest anyway it can be done is fine. There seems to be examples of this all over Thailand. For example Thailand is very near the top of the list for pirated goods. Selling other peoples skills and work for a profit because they lack their own is common. Copied handbags to copied movies can be found with little effort. It is only when they are confronted do they start to whine.

When corrupt politicians had a run in with the 2007 Constitution that was specifically designed to keep corrupt politicians honest, the phrase ‘It isn’t fair’ echoed across Thailand. That perhaps is a key characteristic of Thais when the playing field is returned to being level from being skewed in their favor.

This is not just reflected in politics, but across the board in all aspects of life in Thailand. It is their country so they build in an edge so they always come out on top. Finding a foreigner who actually one a case in court against a Thai is near impossible, even when it was an absolute no brainier the foreigner was right, they still lose the case. This is so common the Thais actually brag about it. Even getting a 3G network in Thailand seems delayed by this as the Thais want to make it impossible for foreigners to compete for contracts.

So now we come to the 1962 court ruling that said the Preah Vihear temple belongs to Cambodia. The Thais begrudgingly accepted the international court ruling but when it was time to mark the border the Thais got out their cookie cutter and declared the border as they have. 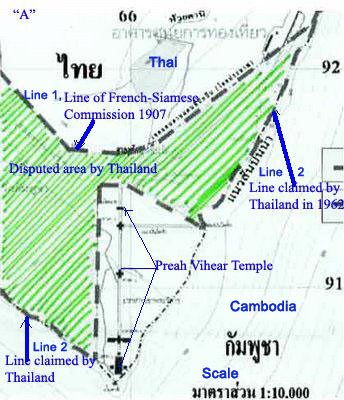 Moving to the Cambodian position on the Preah Vihear temple, the border that they have declared is very different from Thailand. The fact that they are now making gestures to involve the United Nations and whoever else seems to have the Thais on edge. The Thais do not want to involve anyone else in the dispute as it would seem they feel they would be forced to accept the border Cambodia recognizes.

If the dispute remains between the two countries, the Thai anyway it can be done is fine mentality will have a chance to succeed. But when the chance of war over a small parcel of real estate starts to grow, other bodies will simply step in whether the Thais want it or not. If that is the case chances are Thailand will once again face a level playing field and lose.

« The test The elections that wont be »