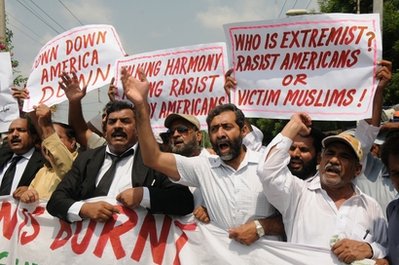 Every now and again you need to invent a word to describe something. So seeing that much of politics in the news evolves around religion, Religiontics seemed an appropriate new word. So Mr. Webster please take note.

It seems everyone has a say about this or that, and the first amendment in the US constitution is all about freedom of speech. But with each passing day there seems to be implied better judgment should be used when doing things like the burning of the Quran in the US. How one person can do that so publicly and cause swelling and inflammation around the world shows just how intolerant some people are. For the most part tolerance is seen as tied to intellect.

Connecting the Dots can most certainly understand the motivation behind wanting to burn the book that is cited for the reason behind the September 11 attack on the US. As it regularly is cited by Muslim extremists, sending a message back after all those effigy burnings of sitting US Presidents and American flags, it seems only fair to play the game that was picked by the extremists.

They shoot at Americans so Americans shoot back, but because that was ordered by politicians it is OK. But as a piece of lead can cause a fatal wound, burning a book can unleash a whole lot more problems. So this is where politics comes in and politicians are trying to keep the storm to a category 2 or less. Burning the Quran (Koran) will for the most part will kiss the ‘bring the troops home from Afghanistan in 2011′ plan goodbye.

So now the fine art of blending politics with religion religiontics is put to the test. If one person burning the Quran in Florida can bring such a fuss and concern to politicians all the way up the chain to the President of the United States, Connecting the Dots simply reads that as religiontics is not doing so well, and perhaps more decisive military muscle is the right answer. The Muslim extremists clearly do not grasp the concept that other people have other views, but the do understand a 1 ton bomb. And for the most part that follows nature as in What can not adapt becomes extinct.

Even in therapy the therapist must go to the intellectual level of the person that is seeing them, and not expect them to come to theirs as it simply may be impossible. So as the extremists understand violence and not coexistence, then that is where things must go to get sorted out. So much for religiontics in this case!

Politics essentially is based in the concept of finding middle ground. But what seems to be forgotten is the reason for the terrorist attacks on the US was simply because the extremists simply could not stomach the concepts the USA was built on. Having people of different faiths more or less interacting in harmony was too much for them. There were other factors that played a part like American arrogance, but for the most part it was the failure to see only one religion in the US, being theirs.

There however one thing absolutely certain about burning the Quran in Florida, it will expose the suppressed colors of Muslims in how they react. If there is wide spread violence globally, then the Anti Muslim stance will become more justified.

There is a lot to say on this and Connecting the Dots will have plenty of entries that show it like it is in simple to understand terms. Many will talk about intolerance, and some will simply talk about educational attainment or lack of being significant fuel for conflicts based on religion.

Note: This entry was composed on 9-9-2010. Events after that date are not considered.