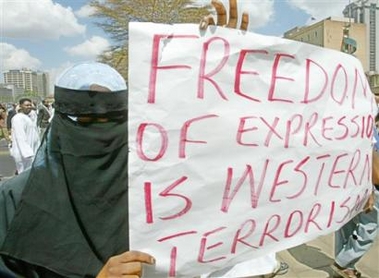 When you try to understand what fuels so many of the conflicts in the world, you seem to keep coming back to the same group in the center of the firestorm. For the most part all groups are tolerant of other groups by design, less one.

Connecting the Dots does not want to be seen as religion bashing. We feel each person has the right to choose their own faith and where and how to worship. Everyone has their own level of involvement with religion be it 100% or right on down to just a check-box on a form if anyone should ask. That is the simple fact of how most religions operate. But in the Muslim faith, this entire paragraph may be seen as blasphemy by the most extreme as there is no choice in the matter as far as they are concerned.

Looking at the very obvious indicators of intolerance, the first one is for the most part invasive. Falling in love with intent to marry a person of the Muslim faith requires that the non Muslim convert to Islam. Then should the relationship end for whatever reason, the person that converted is prohibited from leaving the Muslim faith. In most people’s book that is seen as the removal of the freedom of choice.

For other religions, intermarrying is allowed but admittedly some of the more devout followers may see that as wrong and encourage conversion or try to block the marriage. That becomes personal choices and not dictated by the religion.

The same holds true when it comes to other aspects of life for Muslims. Significant freedoms are removed such as attire. Certain clothing items are required and clothing that is deemed to sexy or revealing is greeted with some form of punishment to the person who wore them. Once again this principal goes against other religions who allow people to dress as they want, only pulling in the reigns when visiting a house of worship. But in that case it is seen more as respect than a rule.

So with this intolerance built directly into the religion, is there any wonder how things get so heated so fast when it comes to dealing with the intolerant. The September 11, 2001 attacks in the US were rooted in intolerance as were the attacks before and after that. In fact the intolerance is so great in some, other Muslims are attacked who practice tolerance and ignore the extreme interpretation of Islam law. But that is no secret, all one has to do is look at the Taliban.

So is there any wonder that Iran’s nuclear ambition is viewed in such a critical light. The great intolerance seen in Iran that includes stoning people to death combined with a nuclear weapons capability to attack the people that they are intolerant of spells violence no matter how you cut the cards. Either Iran’s nuclear ambition will be met with incoming bombs from other countries or out going bombs from Iran, then quickly followed by one big incoming decisive bomb that produces a mushroom cloud. Talks will fail simply because of the need for tolerance of others.

So is there any wonder why there is a movement that on the surface looks like anti Islam, but in fact it is anti intolerance when you step back and look at the underlying message. Not all Muslims are intolerant even though the Muslim religion is intolerant by design. So the aggressions is directed only at the intolerant and not Islam as a whole, and that is the real focus of the problem.

The intolerant are incompatible with today’s world and the desire to destroy others is no longer an issue that can be ignored. That is particularly so when it comes to nuclear weapons. Because of that there can only be one of two answers, according to the laws of nature what can not adapt becomes extinct.

« Thaksin anxiety returning in Thailand The job nobody wants »