Once again the cycle starts in Thailand but with a few added twists. Each time the Red Shirts come out they are more aggressive, and this time all indications are revenge seems to be running in their blood.

Doing a quick fact check over the past few months we find that there are significant warning flags popping up about the Red Shirts that simply say kill people in our way. Short, sweet, and to the point they simply have discovered that the unity that they are going up against will not move and there is little chance of winning a head on clash as was seen during the first half of the year. So this simply elevates things to assassinations and more. In short they are going underground with their attempts to overthrow the government.

As the Red Shirts have learned from their mistakes, and seem unwilling to wait for the next elections, they have adopted a modified strategy. The first and most obvious is they are making a mockery of the State of Emergency in Bangkok. The 5 person limit on assembly is clearly being rubbed in Prime Minister Abhisit’s face. A can of worms has been opened and it seems Abhisit may not want to close it completely.

What we are eluding to is Red Shirt activity provides a reason to maintain the State of Emergency, and also a very legitimate reason not to hold early elections. The question is who is playing who. Red Shirt activity in Bangkok makes Abhisit look weak, but it buys him time to work on reconciliation and bolster his chances in the next regular elections at the end of 2011. So it has come down to a very dangerous game of politics and psychology with hand grenades and horse shoes.

The Thaksin factor in all this is Connecting the Dots has no doubts at all Thaksin is playing the assassination card. We predicted this several months ago, and all the indicators are coming together that this is where things are. The Red Shirt Rallies seem to be testing the new military lineup and are also providing an effective distraction. It is clear this has been well thought out and seems to employ military strategy. 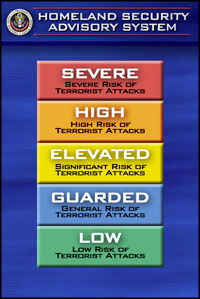 So if Connecting the Dots were to make use of the US Homeland Security advisory system, we would need to say Thailand just moved from yellow to orange. Point of note, the last time green was seen was just before the first People’s Alliance for Democracy (PAD) rally in 2005. From there it was a gradual climb to red in April of 2009.

There is a lot of anticipation of what will happen as October is a sadly symbolic month were blood has been spilled, and if revenge is on the minds of many, this would be the time to act.

We also see this matches the impatient nature of Thaksin. To be seen to wait for the next elections signals to him he is not in control. So this action is being compelled by his mental state, and that is at a dangerous level of anger. Because of that all reasonable threats should be taken seriously.