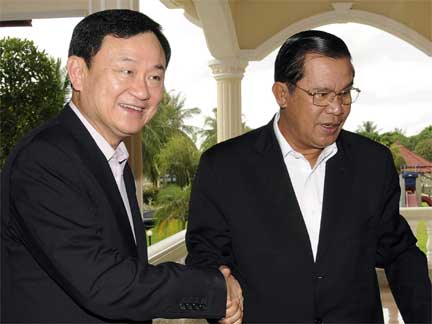 The more you read the news of recent days, the more you can not help but wonder if Thaksin’s parting of ways with Cambodia was just a tactical move. With suddenly growing tension between Thailand and Cambodia over the alleged training of Thai assassins on Cambodian soil, one can not help but sit back and ask if Thaksin pulled a fast one on Prime Minister Abhisit.

Without going too far in any one direction, there are a lot of little things that are happening just below the surface. Perhaps the best example is two boys doing a breath holding competition one being Cambodia, and the other Thailand. While they were holding their breaths both countries took a significant financial hit with the numbers in the ball park of 3% of normal cross border trade. Because of that, both countries were eager to start breathing again. With Thaksin pulling up and out of Cambodia, it was the excuse to gulp air again.

So all things considered Hun Sen is naturally closer to Thaksin than to Abhisit. That stands to reason that there is a better than average chance Hun Sen could be benefiting from some corruption in Thailand that was put in place while Thaksin was still in power, and Thaksin could be getting similar rewards from Cambodia. So seeing that Abhisit is on a mission to end corruption in Thailand, there is motivation for Hun Sen and Thaksin to remove Abhisit by any means.

Add to that one or more of the Red Shirt leaders have been spotted in Cambodia and in particular one that has had no problem crashing the ASEAN summit in Pattaya or climbing down ropes from hotel windows, there most certainly is some factors that point to a ruse that Thaksin has left. Officially Thaksin is off the books in Cambodia, but in reality it seems he went from high profile to low profile and is still working with Hun Sen in some capacity to achieve his goals.

This brings us to the next dot that has not fully emerged yet, and that dot could very quickly push Thailand and Cambodia closer to open conflict across the entire border and not just were border disputes are. But there are equal incentives not to go to violence as well. In either case Thaksin benefits in someway and he will adjust to take advantage of whatever happens.

Meanwhile the fact remains things between Cambodia and Thailand have gone south quickly once the news broke that some 30+ Thais were training in old school Thai politics on Cambodian soil. That simply reinforces and tends to cut past spin found in the media if the 35 were training there or not. This is like a body language reaction that is incapable of lies. This sudden souring of relationships between the two countries also suggest it was a ruse on Thaksin’s part that was successfully pulled off meant to get cash flowing again.