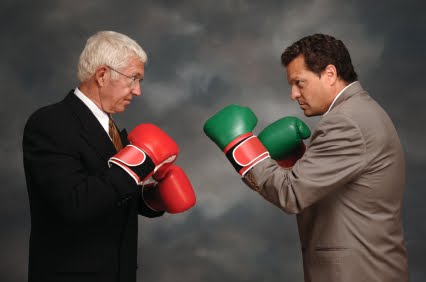 It is a bit difficult to visualize two doctors having a fist fight of sorts. Although it has not come to blows as yet, there most certainly are more than a few mental health doctors displaying their fighting colors, and the reasons are both surprising as well as not surprising.

Discovery is a wonderful thing, and perhaps it is what we humans do best. Sometimes we discover things that are good, and sometimes we discover things that are bad. In many cases we discover something and become so attached to it, it is hard to let go when something better is discovered. A classic example is getting off the addiction to oil and moving on to green energy. Only when people are driven by excessive costs do they consider moving to the next generation of technology.

In some cases symbols of the very old ways are still around, but many people do not know where they originated from. The most obvious symbol people see everyday is blood letting signs that are still used today. We are not talking about vampires, but we are talking about thinking that people who were sick had bad blood that needed to be drained. The signs are white with red and blue spirals and they are displayed mostly at barber shops. When a person was sick they went to the barber to have some blood letting done. The spinning signs represent blood running down a persons arm or leg. So if the spiral is spinning in the downward direction, it says the barber provides blood letting. Signs spinning in the upwards direction says the barber does not provide blood letting services. So of your barber’s sign is spinning downward you can ask him about the blood letting service, but not while he is shaving you.

That human characteristic of not wanting to change is found more so in people in their senior years, and unfortunately people in their senior years have significant pull, particularly so if they have not yet retired. Also people that have put significant time, money and effort into a certain direction, are driven to make their direction work even in the light of a new and better direction. There is a certain feeling of being obsolete and having wasted a lot of time and effort associated with this that can trigger a variety of raw emotions and behaviors. Very simply it is this that is the fuel for the mental health war.

In today’s traditional mental health options, you have a choice of a psychiatrist or a psychologist. The difference between the two is a psychiatrist deals in the use of psychiatric medications, and the psychologist does not. There are also other lesser degrees that follow along the same path like a clinical social worker. In fact in just about every university around the planet you can find classes that take you down this traditional path of thinking.

But now there is a new kid on the block that is so different in concept and the amount of time it takes to help a person recover from some trauma, some psychiatrists and psychologists feel that sacred ground is being walked on by an outsider. In many cases psychiatrists and psychologists have taken to the task of discrediting these new kids on the block in a variety of ways. They can be from accusing advertisers of promoting quackery, to attempting to remove the new kids from public view by attempting to remove their advertisements. Some have even gone so far as seeing to it that the new kid stops writing a column in a magazine or other such mainstream publication.

Now to see a psychiatrist or psychologist doing this is most unbecoming, but non the less some have been doing this. If you stop and think about it, to be motivated to take this action they must certainly recognize the significance of this threat the new kid poses. After all if the new kid can do almost all they can do, and do it faster and with less cost, if that information ever became general public knowledge, guess who’s appointment book is going to look like the Sahara.

So looking at how this new kid does his thing, the example of panic attacks can be used. Most of us have experienced a panic attack at one time or another in our lives with some more severe than others. The choices from psychiatrists and psychologists are talk therapy and drug therapy. In both cases it can take months of frequent visits to overcome the panic attacks with significant pain and suffering felt in the wallet. But the new kid has a different approach and significant results are seen in the very first session.

But panic attacks is not the only thing this new kid is good at. The list ranges from chronic depression to sexual issues to quickly getting rid of phobias that are just another form of panic attacks.

So now you are asking who is this new kid and why have I not heard of him before. Well first off typically people do not openly advertize that they were in need of a mental health professional unless they were so bad it was obvious. So they only talk with family and close friends about their problems and the type of therapy they were taking. But to coin another phrase ‘The proof is in the pudding’ the simple fact that many psychiatrists and psychologists do feel threatened tends to give much weight to the abilities of this new and accepted therapy. That new Kid’s title is a doctor of clinical hypnotherapy (DCH). So for those that care to look, some universities in a small but growing number now offer a doctorates degree in clinical hypnotherapy.