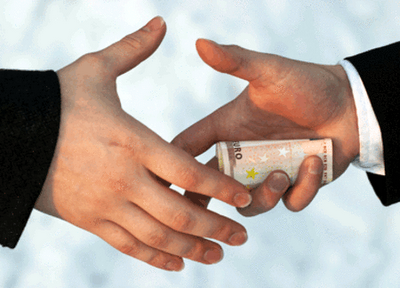 Whether it is part of Thai culture, or simply a bad habit picked up by corrupt politicians, Thais need to pay tea money to make a sale. To say this is unique to Thailand will be up to each person to decide.

Connecting the Dots came across this story by chance while researching other stories. We decided to write about it because we felt it gives a good inside look at how things work and seems to show there is no double standard when it comes to corruption. Although there is a very obvious double standard in pricing that is in direct per portion to the length of a customers nose, this is a story about how Thais deal and do business with other Thais.

The first case involves a Thai company that sells components for various big construction projects that make big buildings work. They sell things from pumps to compressors to valves and so on. The price of the components is very competitive between suppliers being less than 1% apart, so customer service is often the deciding factor in the sale.

In this first case seeing that sales are so competitive, there needs to be some edge to make the sale as it is clearly a buyers market. So depending on where the buyer is in the company being the big boss or some place in the pecking order will decide how the transaction goes. In this case the buyer was not the boss and was looking for some tea money to close the sale. Seeing that prices are so competitive padding the price would stick out like a sore thumb bringing the boss down both feet onto the buyer for being inept or padding the bill. So that left digging into the profits of the selling company to pay the tea money.

Seeing that profits in Thai companies are thin at best, a large volume of sales would tend to offset the tea money leaching. But as business has been off in Thailand and around the world for that part, the wallets of buyers have been closed putting pressure on sales people to make their monthly quota no matter what. When quotas ultimately can not be met what happens is a chain reaction of not being able to afford the tea money for remaining customers resulting in the buyer looking for another company to buy from. That simply translates into a loss of face with the sales person even that the situation is beyond their control.

This particular scenario does seem different than organized crime. Organized crime seems to follow the path of extortion and be a third party to the transaction. This mimics typically what is seen in a corrupt government and is driven by greed.

Other examples play in a sellers market where the prices are raised and depending on who you are, you must pay the asked price. In the second example we talked with a Thai street vendor who was selling German food. The hardware needed for a portable restaurant cart is expensive. Between the grill, hotplates and a few other items, the cost was an astonishing 40,000 Baht. The number of places the supplies could be purchased is very limited as Thai food for the most part needs none of it. A typical Thai portable restaurant would run about 10,000 baht.

When doing a cross check on the items we found the price was very much inflated by as much as 40% over fair market prices when compared to the same items in another country. So there was some clear price gouging going on more so than the typical supply and demand scenario would warrant. There was little doubt that money went into the sales persons pocket and not passed on to the selling company as the receipts provided were produced from the sellers private receipt book and were not the companies standard form.

Needless to say this does paint a good picture of how things work in Thailand when corruption is in play. You simply get less for more.