A pound of cure 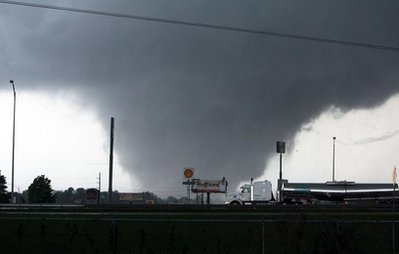 With killer tornados falling from the sky in the US at record numbers, one can not help but wonder if this is not the result of climate change and the new norm of our now angry planet. With hundreds dead in this one outbreak alone, we are truly starting to see natures signature method of restoring balance to what we humans have set so far off.

There is little doubt in peoples minds that the bickering of politicians, greedy businessman, and the lack of funds in lesser developed countries have cause us to go past the ounce of prevention and we are now getting deeper and deeper into the pound of cure. There are those that would argue that this is still just a normal weather cycle, but as time goes on their proof is waning. Their argument fails when you consider severe weather is happening all over the planet at the same time and not just in isolated spots.

Even looking at 2010 where excessive rains in Asia that started in China progressed south all during the year caused damage or loss of 29% of the world’s food harvest is an ominous sign. And as bad as it is today, things only look to get worse. There are not enough points to solidly plot as we are clearly entering a new phase of how the planet is acting. However if we were to give a best guess based on looking at the last 5 years, it is fair to say each year 3% to 5% more of the planet will come under the gun of extreme weather.

There is no need for us to stand on a street corner with a cardboard sign saying the end is near. For the most part people already accept the world as we know it will no longer exist in our lifetimes. Turning off climate change overnight is beyond what we can do. Short of some asteroid hitting the planet and blocking out some of the sun, we are in for the consequences of our inability to provide the ounce of prevention, and we must now provide the pound of cure.