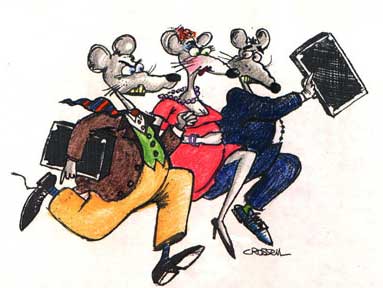 To say that Thai general elections are entertaining is an understatement. Unbelievable political promises, vote buying, cheating and even a few flying bullets are all part of the show.

Between now and early July Thai politicians of all parties will be trying to win votes any possible way they can. To an observer from a western country, the Thai election process can resemble anything from Keystone Cops racing each other, to a bunch of people with diarrhea all making a desperate dash towards a single toilet.

Amazingly enough politicians who would not stand the slimmest of chances in the west, have significant potential to get elected in Thailand. The any way you can is not just a statement, there is already evidence of vote buying before the election process started. If they did that after the election process started, they would be given a red card and banned from politics for 5 years. So to get around that, they simply started early.

There are also promises that are vote buying such as I-Pad computers for all students, (only if they win) and in this case it is more of a bribe than a vote purchase. So with every student wanting an I-Pad, the employment of child persuasion on parents is being employed as well.

There is even a convicted fugitive who is trying to get into the Prime Minister’s office by controlling a political party. So if you thought politics were boring, guess again, this is a creature that has no competition in the level of absurdity that will be on display.

So to say this requires popcorn is one thing, but for Thai politics, you may feel compelled to bang your head against a wall as things that simply do not make sense or have any level of logic happen again and again. Welcome to politics Thai style.