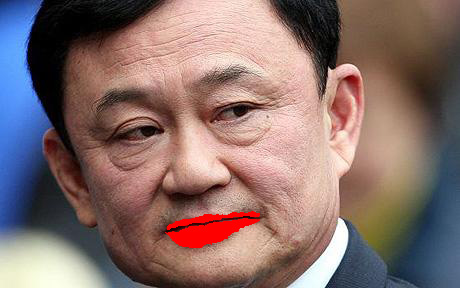 It is an absolute no brainer that Thaksin’s younger sister Yinglick is just a puppet for Thaksin. There is absolutely no doubt the entire reason for this game of making her Prime Minister is to cut Thaksin and his cronies loose from what penalties, fines and jail time the courts have imposed on them.

It is this type of action that will eventually lead to lawlessness all across Thailand as the process of law will have become a joke. Thaksin has already shown there is no depth he will not goto to get his way. Companies will simply pack up and leave simply because there will be no protection by the law and they will just be their for raping by greedy politicians who follow Thaksin.

Dirty politics is already underway as the Pro Thaksin people are doing their best to disrupt, block or destroy their competition’s election campaign. Website attacks, destruction of printed posters, and whatever else they can do. To think that Thaksin would play fair politics is simply a thought for the naive.

Already even if you are not Thai and living in Thailand the hair on the back of your neck is starting to bristle with the knowledge of what is coming. No matter how you look at it, no matter how positive a spin you try to put on it, it looks to be a rough ride full of uncertainty simply because the pro Thaksin team targets the Thais that are undereducated and they can not fathom the fallout of voting for him.

The one bright side in all of this is what could be defined as the good guys being pro monarchy are trying to exploit the achilleas heel of the pro Thaksin bunch. That is the pro Thaksin bunch will cheat, lie or whatever to win. If that can be documented, then their win will be stripped and they will be given a red card banning them from politics for 5 years. By that time Thaksin will have become such old news he may just fade away, but don’t count on it as the psychotic nature of Thaksin will never allow that to happen. Thaksin will trudge on until the day he finally dies.

But while all this is going on there is that anxiety that is blended with anger and being forced to watch Thaksin’s arrogance that will lead towards stress and anxiety on all sides, and that is not good for anyone with health issues that include hypertension. Already the Thai smiles are starting to fade as Thaksin once again forces his will on everyone in Thailand.