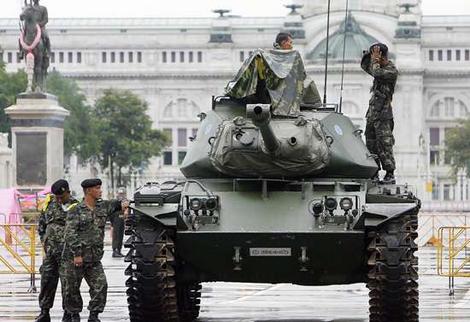 It is obvious both sides of the political battle in Thailand are concerned where the military stands. After all, they do have the power to bring this conflict to an end if they so decide. The military has been doing it’s best to not get involved, but there are subtle signs as to what side they would pick if things turn particularly nasty.

When it comes right down to it, it is the Thai people against a corrupt Government. The people want what is their’s and to stop the huge gouging. Before Thaksin came along, corrupt politicians would skim some money from various projects the Government was nurturing. Perhaps 1% to 3% at best. That level of corruption for the most part was tolerated. But ever since Thaksin got involved, that skimming has turned to gouging with up to 30% or more going to corrupt politicians, and Thaksin has his lion’s share of that.

Some time back Connecting the Dots calculated that Thaksin was taking in about 25 million Baht a day just for himself. That was done by dividing the 46 Billion Baht the court confiscated from Thaksin and divided the number of days that ruling considered. So there is ample motivation from both sides of the conflict, one side driven by greed, and the other driven by the need of basic necessities that have been reduced by corruption.

Enter the military and understand, what they are saying about their position is a bit cryptic, and it is Connecting the Dots interpretation of that we are about to outline.

First and most important, when people talk about the Military or Thailand, they truncate the actual full name. It is actually the Kingdom of Thailand, and it is the Royal Thai Military. So just by that you understand that the King is involved by default in anything that happens in the Kingdom. That includes events that are caused by nature and events that are caused by people.

The King has always had the people’s best interest in mind, and that is reflected in each and every one of his Birthday speeches. His 2005 Birthday speech was perhaps the most potent in a long time as it was generally interpreted to be a dressing down of then Prime Minister Thaksin Shinawatra. Even Thaksin himself read into that and for 1 month he actually behaved until his greed got the best of him and the Shin scandal unfolded in early January 2006.

So when you connect those dots you see that the Government is not necessarily viewed as the people but as separate. It also shows the King understands the Government is entrusted to do what is best for the people, but that is clearly not happening when the level of corruption and greed is so great.

It is also generally seen that the King wants his children (The Thai people) to grow up and sort out their differences on their own. A parent can only do so much and then the child must be exposed to the world to fend for themselves in order to learn to parent their children. It would be somewhat of a loss of face for the King if he needed to intervene again. In Thai culture the parent is viewed in a bad light if there is a problem with the child as it implies poor parenting.

So what we have is an out of control self serving Government that leaches off the Thai people and is not shy about beating them into submission. That alone puts them at odds with the intentions of the King. That brings us back to the Royal Thai Military who’s soldiers have sworn an oath to the King when each and every one entered the service from the top General right on down to the lowest Private. So just by their oath alone they would side with the people if the Government was upsetting the King.

Even when you consider Thailand’s history of Coups, it was all about removing a Government who for whatever reason was not putting the people’s best interest in mind. After each and every Coup, the power was returned to the people to elect a new Government to give it another try.

The latest Coup the Military backed a strong Constitution that had the ability to remove a Government should it behave badly like the Pheu Thai Party (PTP) lead government is doing. So rather than rolling tanks into the street yet again, the Constitution would deal with bad boy politicians. So there was no doubt why changing the Constitution was and still is a top priority for Thaksin.

So in many ways the Constitution is acting like anti-virus software with the virus being corruption. So the military would only need act with a coup if the anti-virus software was disabled as Thaksin wanted. The other reason would be if the violence was too great no matter what side was initiating the violence and the Constitution could not deal with the problem quickly.