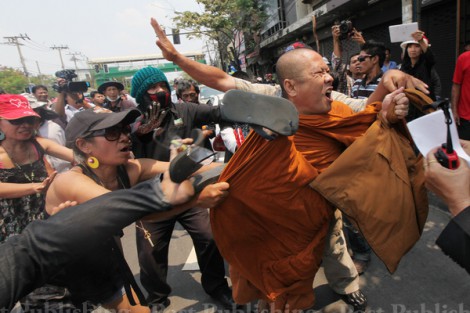 It would appear all respect for Monks is now beyond the ability of the Red Shirts. To attack a monk simply because he wished to pass is about as un-Thai as you can get as Thai hierarchy is completely ignored.

Call it going from bad to worse, the Red Shirts are not winning any points in popularity with the Thai people and beyond as well. To attack a Monk is perhaps one of the single worse things you can do. It transcends Thai culture into a variety of other cultures as well as Monks, Priests, Rabbis and their equal in other religions are viewed with great respect in society. In Thai society the only person higher than a Monk is Buddha.

But in analysis of the Red Shirt behavior, coming to the point of eventually attacking Monks was more or less predicted. As the Red Shirts are nothing more than an extension of Thaksin Shinawatra, and that Thaksin will attack anyone in his way as Thaksin has already shown he places himself above the King, getting to Monks was simply the next step.

Although the incident of attacking the Monk lasted only a few minutes, the fallout will last much longer. If it was just the work of a few rogue Red Shirts, the other Red Shirts would have stepped in and stopped it in just a few seconds. Because that did not happen, the body language translation said they approved of the assault. That simply means for the Red Shirts is the two plus millennium of Buddhist teachings in Thailand has been replace with Thaksin’s teachings. 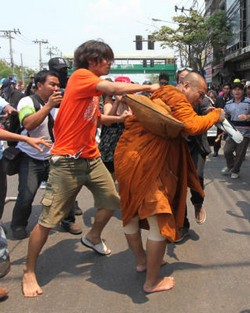 In this case that can very quickly be translated into the teachings of the devil as it is anti Buddha as no other religions seem to be involved. So it is not too much of a stretch to say the Red Shirts are devil worshipers as that is easily backed up by their behavior as they seem to lack redeeming qualities. That also tends to support the phrase we frequently use as ‘Dancing with the devil’.

So the attack on the Monk and the huge public fallout of it will tend to further refine the Red Shirts leaving only the worst of the worst. The more moderate Red Shirts will have drawn the line with that attack and removed their Red Shirts and perhaps seek forgiveness from Buddha.

At this point it does make you think of where this will eventually progress to if left unchecked. But as the Red Shirts are just and extension of Thaksin, Thaksin’s goal of claiming Thailand as his own seems to be where the line of dots are pointing.