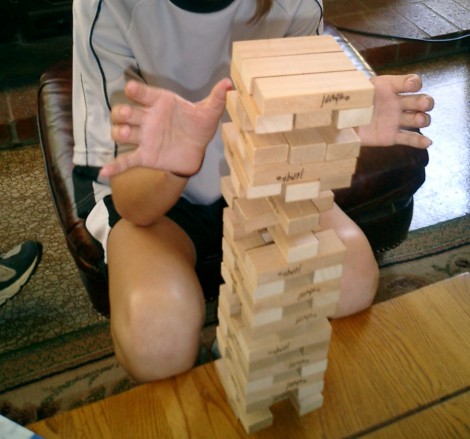 Compelled by a European Union court order Google must start allowing people to be forgotten by removing links. However even in the early stages of the process where news articles are also being forgotten, it is quick to see this becoming like a giant game of information Jenga where the outcome can only lead to out of context conclusions and loss of informational structure. That will eventually lead to undesirable outcomes that are too numerous to predict.

Jenga is a game of skill, logic and the general understanding of gravity. Remove the wrong block and the entire structure comes crashing down. When it comes to making important decisions, a good understanding of all pertinent information is needed as it is the most powerful tool in business. Simply put, knowledge is power and power is knowledge.

So to create a hypothetical model of how this looks to unfold, lets assume Joe X wants some old information about himself removed. Part of that information is included in a news story about an entirely different topic. For example lets say Joe X had a job that included the transportation of highly radioactive nuclear waste, and there was a news story about a near mishap that would have contaminated a large section of a highly populated city. Because Joe X is mentioned in that story and Joe X deemed it to be negative about him and obsolete, the link to that story is blocked.

So Enter Bill T who looks to setup a similar transport company facing all the same risks of transporting dangerous materials. Like any good business man Bill T wants to know as much as he can be it good or bad so his company can run safely and efficiently. Bill T does not want to spend more time or money than needed. So Bill T does his research and because the story about the near mishap that mentions Joe X is blocked, he simply does not know about it. As a result Bill T does not incorporate that safety feature that prevented Joe X from irradiating part of a city, leaving the general public at greater risk.

In a second scenario, lets say Jane H is arrested and accused of a crime that could land her in jail for 10 years or more. Her defense lawyers are doing their job looking for supporting evidence to prove that she is innocent. However her defense lawyers are unaware that the evidence they need is in a blocked news story about Larry W. Larry W simply did not want his name appearing in the same news story as a known gangster, so the story was blocked. As a result Jane H was convicted of the crime that was likely done by the gangster in the blocked Larry W story.

The list of possible problems is endless when information is blocked. Sanitizing a crime scene does not help forensic investigators, and that is why the police block off the crime scene with yellow tape warning people to not enter or face criminal charges. But now under this court ruling, that crime scene is subject to a 600PSI power washing with industrial strength detergent.

Needless to say removing bits and pieces of information from the internet is like Jenga, and innocent people will suffer because of the vanity of others.