With the onset of this influence that looked Thai but was not, the behavior observed was slowly being integrated into rural Thailand. The desire for wealth in a predominantly poor sector of society was overriding the teaching of Buddhism for moderation. That change became the catalyst for change in Thai culture.

With the internet growing in popularity and internet infrastructure starting to reach deep into rural Thailand were few could afford a computer, Internet cafes became the go to place. The Thai people were having a look outside of Thailand for the very first time. Reading news and gossip along with observing behavers of other cultures in particular western culture, Thai people were starting to see things in a way that completely bypassed cultural teachings. So when you couple that with the influence that looked Thai but was more of a western driven behavior, the new behavior was seen as Thai, and that blending set change in motion. 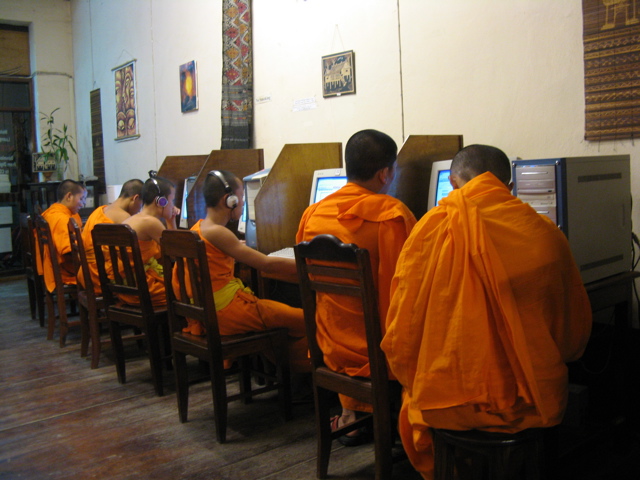 In the central Bangkok area, the exposure to western culture and the desire to have things also fueled the change. Also for the first time there was an emerging middle class of Thais that had enough money to immerse themselves in material things that reflected status as well as seek better education for their children. This higher quality of education was often provided by non-Thai teachers that did not adhere to the restraints of Thai culture. The parts of Thai culture that prohibited advancement were not taught. The tolerance of others that Thais learned as part of Thai culture was replaced with competitive business thinking and to exploit the market when opportunity arose.

In the south and deep south there were other influences that ranged from political insurgents and violence to increased business opportunity feeding the greed and other non-Thai influences. Tourists became more than just guests, they became teachers. What behavior that was resisted before from western tourists was being analyzed and evaluated for integration into the changing Thai culture.

In 2005 and 2006 politics started to have a major influence on Thai culture that started to set Thai against Thai. Many of the poor and lower educated Thais were starting to become pawns of corrupt politicians. Votes were being bought with populist policies and the more educated Thais saw them being tools of the corrupt. The poor Thais were starting to have a taste of materialism although many of the things they were receiving had genuine value for their lifestyle. Because this behavior was coming from corrupt Thais, it was accepted as part of Thai culture. Had it come from a non-Thai it would have been perceived differently.