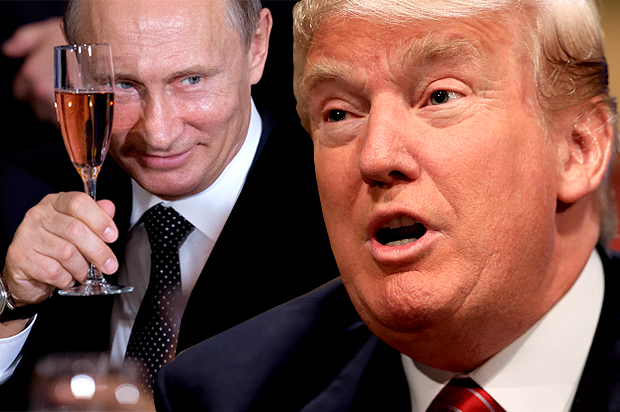 The dots are all starting to come together that strongly suggest Donald Trump had been compromised by the Russians long before the first vote was cast on election day in November 2016. If this turns out to be true, this could perhaps be the most explosive story in America’s history likely exceeding Watergate by a longshot.

Connecting the Dots will now do what we do best, and that is to point out the dots and show the direction they are pointing. Some are political, and some are business related and all the back room deals that Donald Trump has likely found himself in while building his business empire.

The First Dot suggest the style of dealing when making business deals. This is reflected by the type of people he has selected to fill his cabinet. To put it in very simple terms, they are not the most qualified people he could pick. Many have questionable backgrounds and collectively they could be better called a ‘B’ Team and not an ‘A’ Team. Because their backgrounds are questionable, the possibility they could be leveraged by a foreign power through Blackmail is much higher than a squeaky clean ‘A’ Team selection. Although the cabinet selecting and approval process is still underway, the types of people Donald Trump surrounds himself with and interacts with, reflects a business style long before he announced he would run for President.

The Second Dot is Donald not wanting to disclose his Tax Returns despite the IRS saying it is not an issue. His Tax return would show who Donald is in debt with outside of the United States. It would not take a whole lot of imagination that a foreign power may look to exploit those debts that may be part of a secret behind closed doors deal that Trump wants to keep out of the light. Just the mere disclosure of dark deals could be damning for a sitting President with the feeding frenzy that would ensue in the Government probes. Just look at what happened to Bill Clinton for getting a blowjob, and that is far less serious than what Donald may be trying to hide.

The Third Dot is Donald Trump is narcissistic, and to him the most important thing in the world is his self-image. Any news that is in anyway negative to him he now denies and calls ‘Fake News’, despite it is obvious it is very real. So it does not take much to see if there was some genuinely dark and dastardly secrets from the second dot that foreign governments could exploit, there is plenty of leverage that could be exploited through his narcissism.

The Fourth Dot is Russia’s involvement in the elections that eventually resulted in additional sanctions and expelling Russian diplomats from the United States. That simply shows motive that Russia wanted Donald Trump to win. Although the news suggested it was Russia’s displeasure with Hillary Clinton being the motive, it is entirely likely that the true reason was to get a compromised Donald Trump into the Whitehouse. The story about Hillary Clinton was a logical assumption at the time as yet there was no hint Donald Trump was compromised.

The Fifth Dot is Donald Trump’s lackluster non critical views on Russia and in particular Vladimir Putin. This has become so obvious it is now part of a regular parody on the TV program “Saturday Night Live” on the NBC network. Through the eyes of a psychologist, this strongly suggests Donald Trump is submissive to the Russians. This does not match with the normal behavior of a narcissist where they see themselves as better and more powerful than everyone else. Simply put being submissive and narcissistic simply don’t match as they are opposites in behavior.

The Sixth Dot is Lack of interest or concern in matters of national security. Even before he was elected he showed little interest in security updates. Other than the very first briefing that was part of the news coverage as part of the election process that played into his narcissism showing off how important he was, It has been suggested that Donald Trump may not have sufficient reading skills to read long and detailed reports presented to him on a daily basis. However the ulterior motive is perhaps he simply does not want to know to try to protect Americans. If he is indeed compromised, not knowing may be his only defense from the information Russia most wants to know about. In fact it has been reported that Donald Trump wants the daily report to be a single page in length, have bullet points with photos and graphs. In other words he wants it to resemble product packaging with similar information about a product like knowing the capacity of a washing machine and how much energy it uses.

The Seventh Dot is it has been reported that intelligence is being kept from Donald Trump under the fear he may be compromised. This single dot simply says what is going on behind the scenes that has not reached the news. It expresses a deep concern that is on par with possible treason. It also very neatly packages all the other dots together and even connects them to start to draw the picture.

There are also assorted miscellaneous more minor dots like Michael Flynn resigning as national security advisor because of his perhaps illegal interaction with the Russians, and other ongoing regular contacts with Russia by other members of Trump’s team, however collectively they generally point in the same direction.

We at this point do not want to come out and say Donald Trump is compromised, but the dots that are there leave not much else in the direction they are pointing.